WordPress 4.5 Is Out Now with Live Responsive Previews and Smart Images

New WordPress 4.5 „Coleman” is released with catchy optimizations, performance improvements and many bug fixes. The version is named in honor of jazz saxophonist Coleman Hawkins.

Here are some of the new features we would like to put an accent on: 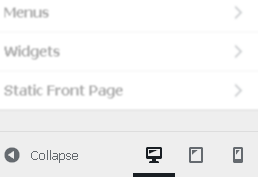 The option for responsive preview is also available when you search for a new theme. We found this especially useful before installing and activating a template since it enables you to check its responsiveness.

Three preview modes resize the screen as they simulate appearance on different devices.

Live preview relates only to the theme responsiveness as it does not demonstrate the website’s operation when accessed by a mobile device.

Some browsers also offer a similar feature for responsive and mobile website preview.

For example, you can enable responsive preview in Firefox through Web Console (Ctrl+Shift+K) -> Responsive Design Mode. This mode only alters the preview sizes without practically functioning as a mobile device. Thus it does not send a mobile device User-Agent to the server.

In Google Chrome – Console (Ctrl+Shift+C) you can enable a mobile website preview through „Toggle device mode“. This tool actually sends the necessary User-Agent to the server since it is disguised as a different mobile device.

Despite the availability of these preview tools, make sure that a website is responsive as you also check it from a genuine mobile screen. Website elements may act differently when accessed through tablets or smartphones as this is valid mainly for videos, registration forms or others.

When an image is uploaded to the website, WordPress creates different sizes. The original image is not edited or changed, but it gets different copies of various sizes. Generating images is enhanced when it comes to resizing, compression and saving metadata. Medatata describing image orientation and copyrights is saved in the different copies.

This improvement makes images load up to 50% faster since there is a noticeable reduction in size (kB), but little change in visual quality.

There is a new feature in the Editor for easy and quick content creation. This feature enables you to create and edit links directly in the body text.

Further Changes and Improvements in WordPress 4.5

Note:
Before updating to WordPress 4.5, we highly recommend that you make a full website backup.
WordPress 4.5 is already available in the cPanel Softaculous library.