In spite of a slight delay in the initial schedule, the new Joomla! 3.7 version is already officially released.

With 3.7. and the upcoming 3.8. and 3.9. versions developers are paving the way towards the new major  Joomla! 4.0. This next major release will contain many nice improvements and features that unfortunately cannot be added to versions of the 3.x series.

We remind you that  Joomla!3.5 fully supports PHP 7+, so if you are using this or a later version and still have not benefited from speeding up your website, now is a very suitable moment to do so. Our hosting or Managed VPS customers can upgrade to PHP 7 in cPanel -> PHP Manager.

Besides slight changes in the appearance of the Backend, Joomla! 3.7 also offers a few more cool improvements and new features. 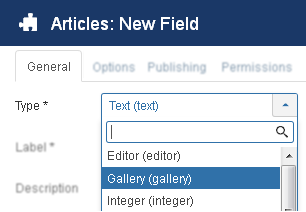 These are additional data fields, (custom fields), that allow adding attributes to articles, users, and contacts.

Custom fields offer up to 15 different types of attributes.

To use custom fields in an article, you first need to create at least one such field. You can do this by going to the Backend – Content -> Fields. Полетата може да се групират във Field Groups.

An improved and modernized URL is coming up in the next Joomla! version.

One thing in the CMS which has not undergone many changes or improvements over the years is the system component responsible for the URLs (also called router or URL router). This component also generates the website URLs.

A new upgraded router was added to the first beta versions of Joomla! 3.7., but it was removed from developments of the version later on.

The new router will enable Joomla! to have faster and better looking URLs with neither unnecessary IDs, nor duplicate content, resulting from different URLs pointing to the same content. The router will also allow setting up URLs in a more concise format: so instead of /services?view=list&id=3 they may look like: /services/freelist. This means that Joomla! will soon be able to offer URLs and settings similar to WordPress :).

Developers, however, claim that this router might lead to a path not right for the existing system users and the strategy for developing the CMS. The new router would have changed the way URLs in Joomla! were handled and for now the 4.0. version will most likely have the router activated by default. This would have forced users to manually alter/redirect the existing URLs of their websites. For that reason the new router was removed from the 3.7. version and still being repaired.

A new team of developers and SEO experts is working hard to finish the router’s development. They will most likely work at least 2-3 more months to prepare and complete the new URL router project so that it may be part of the upcoming Joomla! 3.8. version.

Here is where the idea for this new improved router originates from: Advance the Joomla URL Router

Here you can read the official statement why the router needs to be thoroughly examined before being integrated into the new version: Statement about the new Router feature for 3.7.0.

You can access this new useful feature in Components -> Multilingual Associations as it enables you to easily manage or translate your content through a single interface.

Similarly to the feature for creating and managing menus for the Frontend of the website Joomla! 3.7. has the option for managing the Backend menus..

When you create a new menu you will see an option to make it a Site or an Administrator type.

There are two new buttons in the editor – Menu and Contact.

The editor improvements  include the option to enable / disable / install / uninstall TinyMCE buttons. For users with different access levels , you can create multilevel menus. These improvements aim at making the editor easier to work with and expand its features.

You can find the new features by going to menu Plugins -> Editor – TinyMCE. Depending on the user role you can configure a predefined set  of buttons and menus in the editor. There are three sets activated by default: Set 2 allows public access, Set 1 is used by a manager / registered user and Set 0 that is suitable for admins / editors or super users. You can assign different types of users to the sets.

What awaits us after the last version of the 3. series is released x (3.9)? The new main version of Joomla! – 4.0. Developers state that 4.0. will not completely change the whole system. However, it will lay the foundations for future improvements, features and enhancements that are currently not possible for the 3.x. series. For the time being  developers are working hard on the new Joomla! 4.0. We hope that they will keep the promise to release the new main version with minimum number of incompatibilities  with older versions and upgrading from 3.x. to 4.x. will be smooth.

Before updating we highly recommend that you make a full website backup and check the date of the latest backup of the hosting account from cPanel -> Backup Manager. After you have updated, it is a good idea to make sure that the installed extensions are fully compatible with the new Joomla! version.