DNS Cache and TTL for DNS Records (What is а DNS?)

Up to this moment in the „What is а DNS?“ series we learned that the DNS resolver can discover a specific domain’s IP addres by reaching the DNS Index and searching for the important DNS record “domain.name=IP address”.

DNS caching enables every DNS server or client to save and store a copy of the DNS record for future use by eliminating the need of performing new DNS lookups in the Index.

The time for which the DNS data is considered up-to-date is called Time to Live.

The Time to Live is set up in seconds and is an integral part of each DNS record such as A, MX, CNAME, TXT, NS. For example the important DNS record:

The record will remain for 24 hours in the cache and if a client requests superhosting.bg’s IP, the DNS resolver will perform a new DNS lookup so as to retrieve an up-do-date copy of the DNS record.

Curious:
The maximum length of a period for setting up the TTL is 231-1, which is nearly 68 years!

Theoretically the responsible authoritative name servers and resolvers which send queries to them both are quite sufficient for the proper functioning of the Internet. However, only with the two of them each DNS lookup will need to start from the root DNS servers. As of mid-2017 there are over  330 million registered domain names. If translating them is left only to the resolvers and responsible name servers, this might lead to excessive load and even a crash in the DNS Index.

To improve efficiency, reduce the DNS traffic and increase performance of the applications, DNS cache servers need to be added to the DNS system. They store a copy of the DNS records, received from the DNS lookup for the specific TTL period. The cache is used for every upcoming query for the same data. DNS cache speeds up domain load.

After the DNS domain records are saved in the DNS cache: 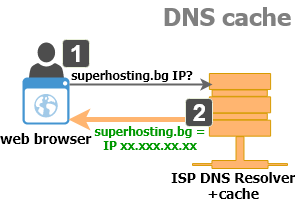 ( 1 ) Enter the domain name in the browser. The browser then will ask the local DNS client “What is the IP address of this domain” and the DNS client asks the cache resolver of the ISP.

( 2 ) The caching DNS resolver directly answers with the IP domain address without performing a lookup in the Index. The web browser then connects to the website server.

The cached DNS data is obtained only after the DNS resolver has once performed a lookup in the DNS index.

The DNS record TTL indicates to the DNS server for what period of time the record is considered up-to-date and can be stored in the cache. The usual TTL is between 2 and 48 hours and that’s why after a change in the DNS data there is a global propagation time from 2 to 48 hours. 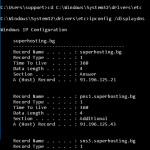 СNormally, your PC’s operating system should have a local DNS resolver (DNS client) with local DNS cache. Therefore, it is possible that the cached DNS data is already available on your computer.

For example, if you are using Windows 10 and you want to see what is happening in your computer’s DNS cache, use the command „ipconfig /displaydns“ through CMD.

Open CMD (Win+R, type cmd, Enter) and then use the command:

To clean the local DNS cache use:

ipconfig /flushdns
Tips from the Support:
When a website is moved to a new hosting service, the server’s IP address changes so you can reduce the TTL for the domain А record beforehand. This way you will reduce the propagation time for the new DNS details after you change the domain IP address. The TTL change is performed in the current domain DNS zone. For example you can set up a TTL 300 which equals 5 minutes.
It is important to take into account the value before the change and that the new value will take effect after the previously set time is over. Example: The current value is 14400 which equals 4 hours. We can reduce this to 300 which equals 5 minutes. After 4 hours have passed, the 5 minutes TTL will take effect. After the data is already copied to the new server, the old IP address in the current DNS zone is replaced with the new one. This way the DNS propagation time is only 5 minutes now.